Emil: Insha Allah, 5,312 villages will have memorizers of the Koran

Home   RELIGI Emil: Insha Allah, 5,312 villages will have memorizers of the Koran

Emil: Insha Allah, 5,312 villages will have memorizers of the Koran 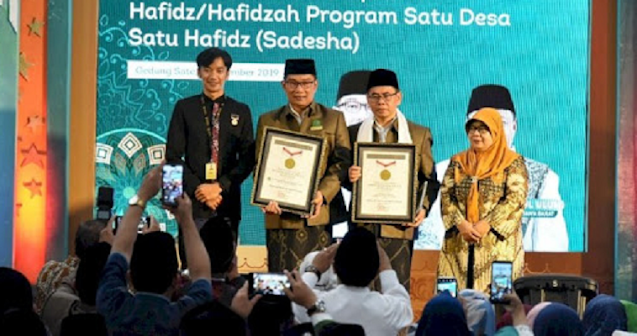 AHADNEWS ■ West Java Governor Ridwan Kamil, launched Sadesha Phase II Program throughout West Java.
Emil launched the Phase II One Village One Hafidz (Sadesha) program with the number of participants that had increased to 4,500, while only 1,500 participants in the first phase of Sadesha.
"Insha Allah, 5,312 villages will have Al-Qur'an memorizers through the Sadesha program. This program was so fast that last year it produced 1,500 hafidz which we gave scholarships to print hafidz of the Qur'an. Now 4,500 hafidz," said Kang Emil, while attending istighosah Kubro at the Pusdai Mosque, Bandung City, yesterday.
The Sadesha program itself is divided into two, namely scholarships for memorizers of the Al-Qur'an and empowerment of hafidz as Al-Qur'an teachers in villages to print new Qur'an memorizers.
"Those who learn directly and hafidz Al-Qur'an we send to villages to train village people to memorize the Al-Qur'an," said Emil.
The Sadesha program is also in line with the central government's vision to improve the quality of Human Resources (HR). Improving the quality of human resources is not only about technology and education, but also on religion.
"I believe that if our generation is qur'ani, then Allah will give Allah's help and blessings to the land of West Java," he said.
The launch of Sadesha Phase II was carried out symbolically by attaching vests to two participant representatives by Emil and witnessed virtually by the students.
■ Hms / R-01