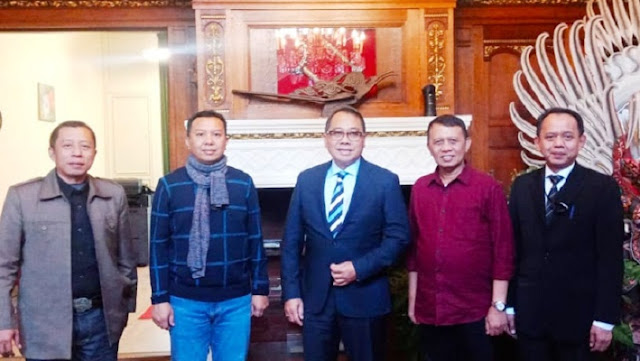 JBN NEWS ■ Ambassador of the Republic of Indonesia to the Kingdom of the Netherlands, I Gusti A. Wesaka Puja received a visit from the Regent of Selayar Islands, H.M. Basli Ali at the Indonesian Embassy in The Hague (20/2).

During the visit, Basli Ali was accompanied by the Selayar Islands Regional Secretary, DR. Marjani Sultan and Rakhmat Zaenal.

During the meeting, I Gusti explained the important role of Indonesian representatives abroad, which not only relates to diplomatic relations with one country, but also spearheaded development and trade cooperation with other countries.

Of course, including connecting B to B (business to business) between the countries, especially investments that are the priority of the Jakarta government.

The Ambassador hoped that regional governments throughout Indonesia could take advantage of this opportunity, among others by participating in exhibitions or performances to promote the products or potential of one region.

The senior ambassador, a career diplomat who has served in many countries, then gave an example of how Bali consistently took advantage of the opportunity.

It was even explained, at this time an exhibition was held which specifically raised the natural beauty, history and culture of Bali at the Volkenkunde Museum in Amsterdam.

"Some Provincial Governments and Local Governments have taken advantage of this opportunity. Even for several occasions, the Central Government and the Indonesian Embassy have facilitated the implementation of the event, both for various creative economic products, as well as tourism from various regions," I Gusti said.