Prabowo Meets Sheigo In Russia, This Is Discussed

Prabowo Meets Sheigo In Russia, This Is Discussed 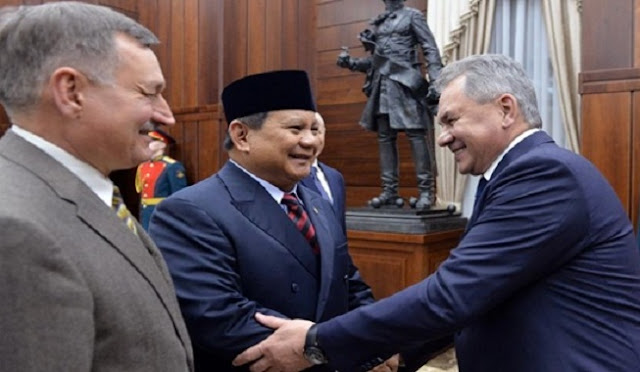 This meeting marked the 70th anniversary of Russia's diplomatic relations with Indonesia. The Indonesian Ambassador to Russia, Wahid Supriyadi, confirmed that the plan to purchase defense equipment was also discussed at the meeting.

"Just waiting for the process," Wahid said on Wednesday (29/1) night.

Wahid did not explain in detail when exactly Indonesia will sign the purchase of the defense equipment.

Previously, it was said that Indonesia planned to buy 11 Su-35s, and this has been discussed since last year.

However, until now there has been no certainty from the Indonesian government whether the purchase of the aircraft will continue.

Wahid conveyed that during a 2-day visit in Moscow, Prabowo and the delegation would hold a series of meetings with the defense and IT industries, particularly in relation to cyber security.

During his visit in Russia Minister of Defense Prabowo Subianto was accompanied by the Ambassador of the Republic of Indonesia to the Russian Federation concurrently the Republic of Belarus, M. Wahid Supriyadi, Inspector General of Defense Keman Lt. Gen. Ida Bagus Purwalaksana, Dirjen Pothan Marsda TNI Ponang Djawanto, as well as senior officials related to the Indonesian Ministry of Defense.

The Russian Defense Minister, Army General Sergei Shoigu, said in his statement that Indonesia was one of Russia's most important partners in the Asia Pacific region.

"We note that there are prerequisites for bringing bilateral relations to the level of strategic partnerships, including through military institutions," Sheigo said. (rls/Foto: KBRI Moscow)