Prabowo: Defense Cooperation between Indonesia and France Continues to Strengthen

Prabowo: Defense Cooperation between Indonesia and France Continues to Strengthen 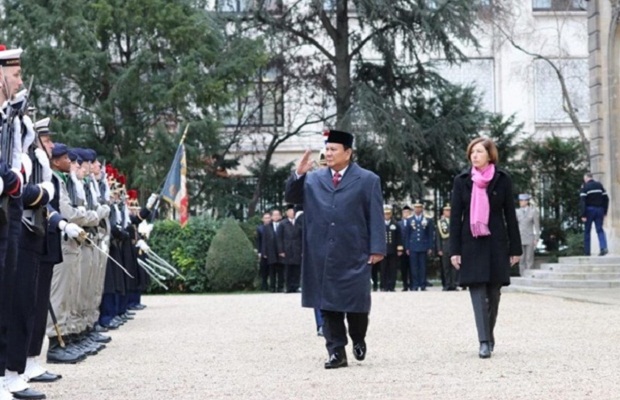 Prabowo received a Military Honor Ceremony in the courtyard of the French Ministry of Defense on Monday before meeting with French Defense Minister Florence Parly.

Indonesian Ambassador to France Arrmanatha Nasir who accompanied Defense Minister Prabowo during his visit in Paris, explained the opportunity to increase defense cooperation between the two countries is still wide open, bearing in mind that Indonesia and France have good bilateral relations and independent foreign policy.

According to Arrmanatha, in an open and interactive meeting, the two defense ministers agreed to strengthen defense cooperation to be set forth in the form of a Defense Cooperation Agreement (DCA).

Arrmanatha said that France as a country that has an advanced defense industry, can be a strategic partner in Indonesia's efforts to strengthen the military defense equipment and accelerate the development of the national defense industry.

In addition to meeting with the French Defense Minister, during his stay in Paris on January 11-13, the Defense Minister had held a series of meetings with defense industry companies in the field of warplanes, ships, radars and avionic systems, as well as ammunition.

During the meeting, the French defense industry was expected to be able to work together in accelerating the progress of the Indonesian defense industry as well as strengthening the TNI defense system through technology transfer, increasing the use of local content, and increasing human resource capacity.

Prabowo stressed that Indonesia was ready to collaborate and work with French industrial companies in order to make Indonesia's defense industry a part of the global defense equipment production chain.

Since 2013, Indonesia and France have had an Indonesia-France Defense Dialogue (IFDD) forum which is held every year.

Through this dialogue, the focus of the area of ​​cooperation and discussion includes areas such as training and education, visiting each other, and combating terrorism.

The Indonesian Minister of Defense's visit to France this time was the first high-level meeting that began a series of 70 years commemoration of diplomatic relations between the two countries, especially in the defense sector. (**)

Foto: Defense Minister Prabowo Subianto was greeted with a Military Honor Ceremony in the courtyard of the French Ministry of Defense, Paris, Monday (1/13/2019), before meeting with French Defense Minister Florence Parly. - Indonesian Embassy in Paris/ANT