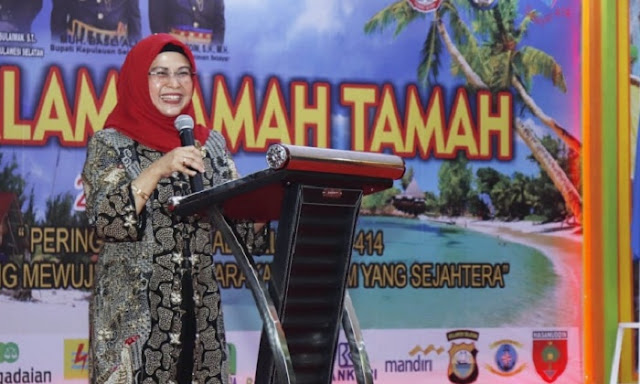 JBN.CO.ID ■ The fourth daughter of the Vice President, Siti Nur Azizah Ma’ruf, greeted the people of Selayar on the 414th Anniversary of Selayar in the Regent's House Hall on Friday (11/29) night.

She said that he was now part of the Selayar People, because he had bound the sacred promise of marriage to Selayar's son, Muhammad Rapsel Ali, now a member of the Indonesian Parliament from South Sulawesi I.

"I am a member of Permas (Selayar community union), not an outsider. I have married a Selayar person, so I am Permas, "said Siti Nur Azizah.

Siti Nur Azizah came to Selayar with her husband in order to attend the Selayar 414th Anniversary.

"I hope our presence with my husband does not diminish the meaning of our activities. The Vice President gave a message that Selayar is 414 years old so that the people of Selayar still have the spirit of being a maritime community that is persistent and brave in living and continues to support the efforts of the Government of the Selayar Islands Regency to realize prosperous maritime community, "said Nur Azizah Ma'ruf Amin.

Nur Azizah said that the Selayar age of 414 years had a long enough history that it should reflect the nationalist religious spirit.

"I think the religious spirit is increasingly rare in Indonesia, because our generation is surrounded by trans-national ideology which carries a nationalist spirit of radicalism and anti-nationalism," he said.

If not careful the ideology will possess our children and of course potentially endanger the Republic of Indonesia.

Therefore, added Siti, on the 41st Anniversary of Selayar I hope that the nationalist religious spirit of Selayar identity continues to reverberate and spread throughout the hearts of the nation's children.

"Thus we can save NKRI together, by bringing enthusiasm and ideals built from the Selayar Island that we love," he said.

Although this is the first time she has come to Selayar, she sees that the Selayar Islands Regency has enormous potential given by Allah SWT.

According to him, a very big opportunity for the Selayar people, because with this potential Selayar is not only known locally and nationally, but also globally with maritime-based tourism product packaging.

"I think the support from various parties, both from the central government, the province can realize the dreams of the people," he concluded. (KT2)