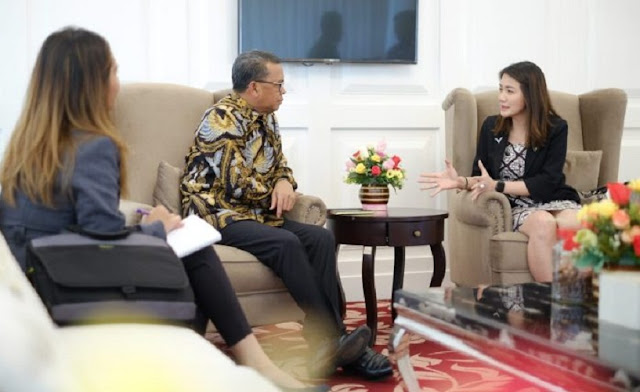 On this occasion, Nurdin explained a number of strategic programs in South Sulawesi which became a priority in his leadership era.

These include opening up isolated areas as new economic centers, optimizing technology in agriculture to support food supply in Indonesia, and opening direct export channels (Direct Call) through the New Port Makassar (NPM).

"At the moment we are focusing on opening new regions which will become new economic centers," said Nurdin Abdullah.

Nurdin Abdullah also explained the results of his visit to two regions in Australia some time ago.

The recipient of the Bung Hatta Award also said, entering the demographic bonus challenge of 2030, Indonesia has large capital as an agrarian country in sustaining world food.

"If we were inferior as an agrarian country, now it is time for us to be proud, because the threat ahead is no longer a world war, but about world food scarcity, the number of population is increasing, while the earth's area does not increase, we can become a food support for the world," said Nurdin optimistically.

Meanwhile, the New Zealand Embassy Trade Commissioner, Diana Permana said, sharing knowledge with Governor Nurdin in order to find out more about South Sulawesi as the gateway to eastern Indonesia.

He said, the opportunity for New Zealand to collaborate with South Sulawesi was in the area of ​​animal husbandry and tourism.

"By dialogue with the Governor we see opportunities for farming and sustainable tourism, this is what we want to dig deeper into, more or less where we can transfer knowledge," she explained.

Regarding the reasons for choosing South Sulawesi, Diana said South Sulawesi was the gate of developed Eastern Indonesia and was ready and supported with open infrastructure and commerce.