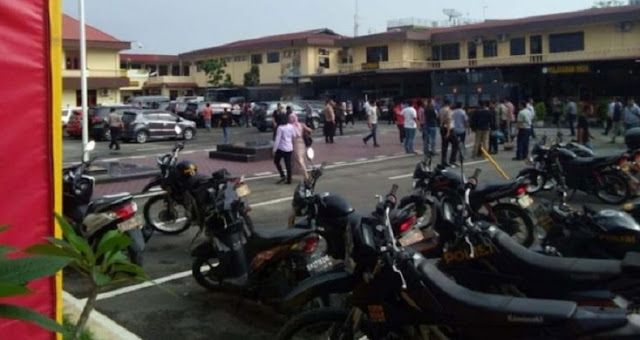 The bombing took place when a number of residents were taking care of the Police Record Certificate, one of which was for the sake of participating in the CPNS selection.

Dozens of Brimob guard tightly around the Medan Polrestabes after a suicide bombing by an unknown person, on Wednesday (11/13/2019).

The explosion that occurred Wednesday morning at 08:45 was allegedly killed the bombers.

"At the moment the TKP is being carried out by the North Sumatra Detachment and Regional Police. Waiting for the results of further investigations," said Brigadier General Dedi in Jakarta, Wednesday (11/13/2019).

The information obtained was that a suicide bomb blast was allegedly carried out by someone who used an online motorcycle taxi attribute and exploded around the Medan police station.

One body with an incomplete condition was found in the vicinity of the bombing site at Medan's Polrestabes, North Sumatra. There has been no confirmation about the body's identity in question.

The officer said that the suicide bomber claimed that he wanted to take care of the Police Registration Certificate (SKCK) when he entered the Medan Police Headquarters complex.

The police have examined the man before entering the Medan Mapolrestabes complex. In the man's bag, nothing suspicious was found.

"Only books were found in the bag," said Tatan.

The man is wearing a jacket. The policeman on guard had reprimanded for the man to open his jacket.

Many people who want to process the making of SKCK. In the parking lot, the bomb brought by the perpetrator finally exploded.