What Is the Big Agenda Between Prabowo and Jokowi?

Home   BALINEWS INDONESIA TODAY POLITICS What Is the Big Agenda Between Prabowo and Jokowi?

What Is the Big Agenda Between Prabowo and Jokowi? 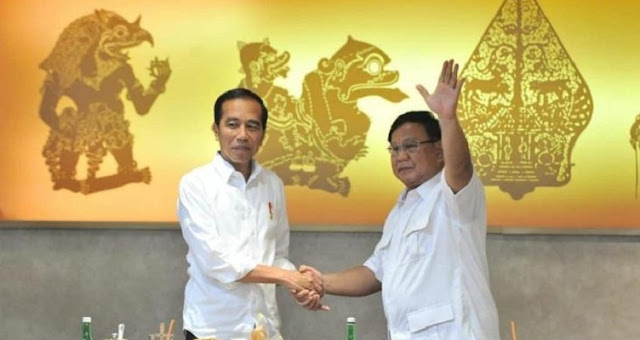 JBN.CO.ID ■ The motive for joining Gerindra Party Chairperson Prabowo Subianto into the Advanced Indonesian Cabinet under President Joko Widodo's control is still a question. Prabowo, who is now serving as Minister of Defense, is said to have begun to soften with the government.

Regarding this matter, it was also highlighted by political observer Hendri Satrio. He suspected there was a big agenda made by the two of them.

He saw that the big agenda began with a meeting between the Chairperson of the Democratic National Party, Surya Paloh and Prabowo some time ago.

During the meeting, an agreement emerged to amend the 1945 Constitution which is comprehensive. Another agenda was the matter of the meeting of the Chairperson of PDIP, Megawati Soekarnoputri with Prabowo, which ended Gerindra's entry into government.

"But what is that agenda? One of which was answered during the meeting between Surya Paloh and Prabowo regarding the amendment [changes to the 1945 Constitution]," Hendri Satrio said in the Indonesia Lawyers Club (ILC) program which aired on TVOne, Tuesday (29/10/10) 2019) night.

Aside from these two agendas, Hendri is still wondering what the next big agenda will be between the two national figures.

In 2009, there was an agreement between Prabowo and Megawati known as the Slate Agreement which contained seven points of agreement. As for one of the points discussed about the support of Megawati to Prabowo who will go forward in the 2014 presidential election.

"Megawati Soekarnoputri supports the nomination of Prabowo Subianto as a presidential candidate in the 2014 Presidential Election," the agreement concluded on the seventh point.

On that basis, is Prabowo's entry in the government a big agenda related to the upcoming 2024 Presidential Election?