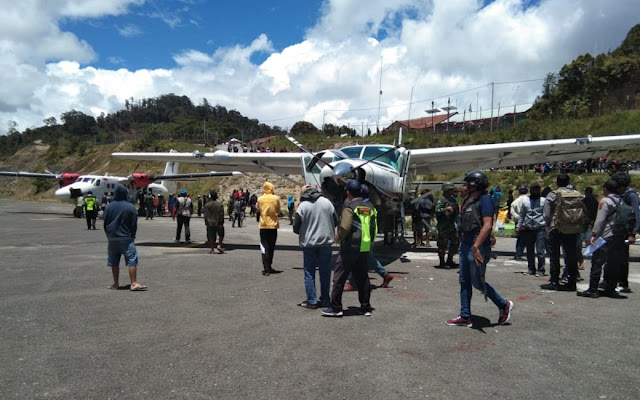 The three victims were online motorcycle taxi drivers who had worked to serve public transportation in the Sugapa District. The victims are Rizal (31 years), Herianto (31 years) and LaSoni (25 years). All three were found in the condition of a gunshot wound to the head and injuries caused by sharp weapons throughout the body.

The discovery of the three bodies was first reported by one of the elected candidates, Titus Kobogau, who was intercepted and robbed by the KSB when he would take a Kingmi Church pastor in Kp. Pugisiga, Hitadipa District, Intan Jaya Regency at around 11:00 local time.

At that time, Titus could see the three victims who died on the spot. Allegedly the three victims had just been executed half an hour before. By this group Titus was allowed to continue the journey and deliver news to the Regent of Intan Jaya, Natalis Tabuni and Deki Belau (youth leaders) arrived at the location and immediately evacuated the bodies of the victims to the Sugapa Health Center.

The discovery was then reported by Titus to the Regent of Natalis Tabuni. In the afternoon the Regent immediately held a limited meeting to retrieve 3 bodies at the scene.

Around 19:00 the pickup team consisting of Yohakim Joani (Kabag Kesra), Januarius Meisani (Head of Tourism), Kristianus Tebay (Hospital Director) and Deki Belau (youth leader) arrived at the scene and immediately evacuated the three bodies to the Boligai Health Center. Upon arrival at the Boligai Health Center, the body was autopsied by the medical team.

The Regent of Intan Jaya, Natalis Tabuni, who saw first hand the condition of the corpse strongly condemned the inhumane deeds of the inhuman Lekagak group.

The Intan Jaya district government will help with the entire funeral costs for the victims.

Meanwhile, Military Commander XVII / Cenderawasih, Major General of the Armed Forces Herman Asaribab, expressed condolences over the deaths of three ojek victims who were victims of the murder of the armed separatist group.

"This act of terror clearly proves that separatists always try to disturb peace in Papua. This is clearly not the work of people who know God," explained the Military Commander.

"We will continue to coordinate with police and local government elements to pursue separatists who always create terror and fear of the people," the Military Commander said.

The commander continues to urge all elements of Papuan society to always maintain and maintain peace in the land of Papua.

"Let's stop the conflict in Papua together. Papua is a land that is blessed by God, don't give any chance to any party to make Papua a conflict area and become a blessing barrier for the people of Papua," said Maj. Herman Asaribab.