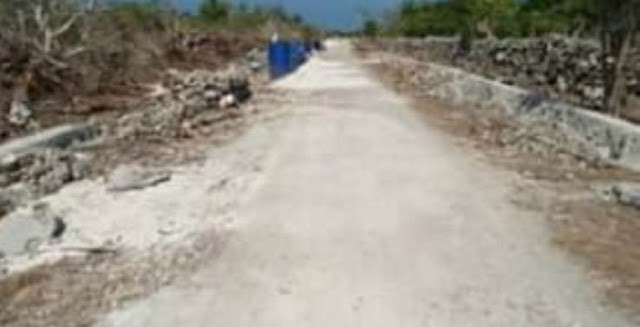 SELAYARPOS.COM ■ The Bonerate-Sambali hotmix road project worth more than 11 billion rupiah is currently in the public spotlight.

The reason is that the road project, which was financed through the budget in 2019, was allegedly "careless".

It is known, the length of the project road is almost 9 kilometers, the location is in Bonerate, Pasimarannu District, Selayar Islands Regency.

Project observers and social media activists have previously criticized the project, because it was considered to be done "haphazardly" by the implementing contractor. Including the executive did not pay attention to the rules that govern, installation of project boards.

Furthermore, it is said that the construction of road divider slabs is not planted and without foundation, according to observers with the same work experience, it will shorten the life of the road, and easily damaged.

"Yes, if this is the way it works, it will be damaged quickly and of course it will cause losses. Just look at how it works immediately," explained the source, a professional.

Coupled with materials taken from local materials including sand that is not under river sand, because in the Bonerate area there is no river. There is only sea sand.

If only the development specifications are possible using sea sand, that's OK, but if the sand specification is river sand, then of course it will be prone to error bestek. And this contains the value of state losses, explained the source again.

The leaked information received by this media said that there was involvement of the Camat in the procurement of materials worth hundreds of millions in this project.

However, this information was later denied by the Sub-district Head Pasimarannu, that he as a government only facilitates fast work and the community has additional income.

The Camat said that the information was not true and I would clarify it to the executor.

Other information is that the implementing contractor is considered unprofessional due to shortages of transportation vehicles and delays in the supply of asphalt and other materials.

Of course this needs to be reviewed by the government, whether it is worth guarding or continuing with the risk of being late and it is feared there will be a delay in the implementation of work which of course will harm the country, explained the resource person, whose identity did not want to be published.

Unfortunately, until this news was published there has been no confirmation from relevant government officials, regarding the implementation schedule, equipment and the bestek and spec material for this road project.

While a number of parties suggested that the Government review the project to avoid greater state losses.