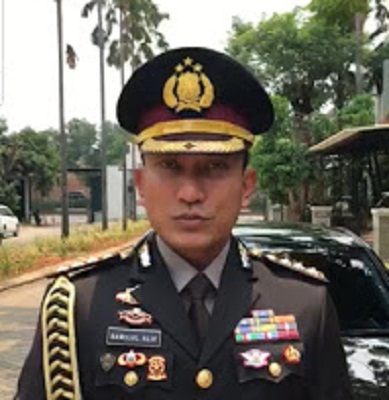 JBN.CO.ID ■ Tangerang City Police Chief Sr. Comr. Pol Sabilul Alif was elected as aide to the Vice President of the Republic of Indonesia KH. Ma'ruf Amin. Sabilul was chosen after undergoing a series of selection tests with several other candidates.

"Please pray that we always give the best and be given the opportunity to pursue a career," he said during his activities on Sunday (10/20/19).

Sabilul's election as the Vice President's Aide was strengthened by Minister of State Secretary (Menesneg) Decree No. 286 of 2019.

The decree was signed and issued on 18 October 2019. So that on 20 October 2019, at the time of the Inauguration of President Joko Widodo and Vice President KH. Ma'ruf Amin, Sabilul has begun to carry out his duties in assisting RI-2.

Besides being known for being innovative, Sabilul is also known as a religious police figure. Even the people call Sabilul the title of santri police. This was inseparable from Sabilul's diligence in building communication with the ulama and the boarding school community.

On the Santri Day Commemoration in 2017, Sabilul initiated the waqf of 1000 yellow books for the students. That step is a form of concern for the learning process in the world of pesantren.

It was not separated from the educational background of Sabilul who had studied at an Islamic boarding school. So that the soul of the santri flows in his blood. Because of that, he was never awkward to show reverence to the scholars.

Sabilul is known to be close to Habib Lutfi bin Yahya. In fact, one time Sabilul was given money by Habib Lutfi. The money can be said as initial capital to hold a grand tablig in Tangerang Regency.

"I attended the lecture of Habib Lutfi in the Curug area, Tangerang. After the lecture, I approached him. Then he gave me some money and asked me to lead the activities of the Tablig Akbar with the theme of haul akbar ulama and Tangerang fighters. Alhamdulillah, the event could take place," recalled Sabilul .

In another dimension, Sabilul is also a person who dares to make a breakthrough. Among them, the idea of ​​returning the remaining grants to secure Tangerang District Election in 2017. The move generated positive responses from many groups.

While the Head of Banten Police Public Relations, Police Commissioner Edy Sumardi Priadinata Sik., M.H confirmed the information that the Chief of Tangerang Police Commissioner Sabilul Alif, S.H., Msi, had been believed to be aide to the Vice President of the Republic of Indonesia for the 2019-2024 Period, K.H Makruf Amin.

Since Sunday, October 20, 2019, based on the Decree of the Minister of State of the Republic of Indonesia, through a series of very strict selection and through very high competence. Alhamdulillah, Kombes Sabilul Alif was successfully elected and qualified to become the aide of the Indonesian Vice President.

Whereas for the Tangerang Police Chief Position Currently, there is still no substitute, still waiting for the Police Chief's telegram. But for now, the position of the Kapolresta is carried out by the Task Implementer, namely the Wakapolresta Tangerang, so that the duties of community service remain to be carried out properly. Congratulations and success for our best friend, Senior Commissioner Sabilul Alif, said Edy, ending the information.