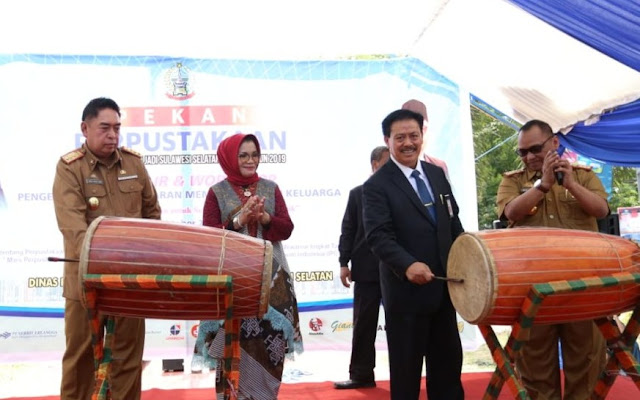 On this occasion, Lies F. Nurdin was named the "Reading Mother of the Province of South Sulawesi" by the Head of the National Library of the Republic of Indonesia, Muh. Syarif Bando.

"Yes, after being inaugurated today as the Reading Mother of South Sulawesi Province, I think this is a heavy mandate, but the blessings are great. So it must be run well, "explained Lies F. Nurdin who is also the Chairperson of the TP PKK Prov. South Sulawesi.

After being inaugurated as the "Reading Mother of South Sulawesi Province", Lies (a nickname from Nurdin Abdullah's wife) was ready with various programs that would be carried out in order to increase awareness of reading interest in the people of South Sulawesi.

"The steps we take going forward is that we have made several village libraries. While this is in the city of Makassar first, because Makassar is a municipality that is the door and image of South Sulawesi. This year we created 10 village libraries which are aids from PT. Askrindo. Insha Allah next year we make another village library with the help of the Provincial Library and Archives Service. South Sulawesi, "said Lies who is also the wife of Prof. HM Nurdin Abdullah (NA).

With the existence of the village library, it is expected to bring the community closer to books. Starting from children to parents, later is expected to be able to enjoy reading books and reduce addictive gadget.

In addition to the village library, Lies and related stakeholders have also designed a library for mothers and children, as well as disabilities and the elderly to further support the community's interest in reading.

"Insha Allah next year a mother and child library, disability and the elderly will be formed next to the Ratu Indah Mall, Makassar. Next year we will also get assistance from the center to build similar libraries in seven districts / cities in South Sulawesi, "explained Lies.

At this moment Lies also had the opportunity to visit the exhibition stands of the District / City Library and Archives Service in South Sulawesi.

"Alhamdulillah, the booths contain a lot of works by local writers. "That is very encouraging for me, because they know what they have to talk about in their area," he said.

Lies added that she was eager to meet with local writers to ask them to make books that build character, morals and manners for children.

The importance of the role of libraries in the community was also conveyed by Muh. Syarif Bando as the Head of the National Library of the Republic of Indonesia.

"The library is present as a basic obligatory affair in every Regency / City. I see all libraries in South Sulawesi have begun to develop. Insha Allah, our commitment to how to manage libraries in a transformation can be realized in accordance with the vision and mission of the Governor of South Sulawesi Province, "said Syarif Bando.