Prabowo will be present at Jokowi's inauguration

Prabowo will be present at Jokowi's inauguration 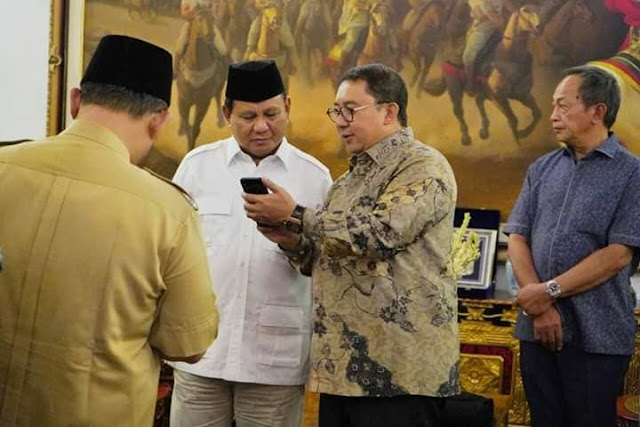 JBN.CO.ID ■ MPR Chairman Bambang Soesatyo appreciated the attitude of statesman DPP Gerindra Party Chairman Prabowo Subianto who was willing to attend the inauguration of the president and vice president-elect on Sunday (10/20/2019).

"He (Prabowo) stated, even if he was not invited (the inauguration of the elected president), he would attend, this is extraordinary," Bamsoet said at Prabowo's residence, on Jalan Kertanegara IV, Jakarta, Friday (11/10/2019) night.

He said this after meeting Prabowo to convey the invitation for the inauguration of the elected president and vice president.
Bamsoet said that the leadership of the Indonesian People's Consultative Assembly deliberately met Prabowo, not only as a former presidential candidate but as General Chair of the Gerindra Party, the number two largest party in voting in the 2019 Elections.

He considered that the attitude displayed by Prabowo confirmed to the public that the former Kopassus commander wanted to show unity as the main thing.

"Earlier Prabowo said that being united was cool. So thanks to Prabowo for the values ​​of statesmanship he conveyed," he said.

Prabowo Subianto said he was honored after being visited by 9 MPR leaders and invited him to attend the inauguration of the elected president and vice president.

He stressed that he would attend the event on October 20 as a form of respect for the political system and the constitutional system of Indonesia.

"I will attend the inauguration. I must attend as a citizen to respect the political system and the constitutional system and respect our country," he said.

He said, in his discussion with the 9 leaders of the Indonesian People's Consultative Assembly, he reminded us that we could be different and debate loudly but the end must be in the interests of the nation and state.