Political Stability Is Turbulent, Because Community Trust In Weak Leaders

Political Stability Is Turbulent, Because Community Trust In Weak Leaders 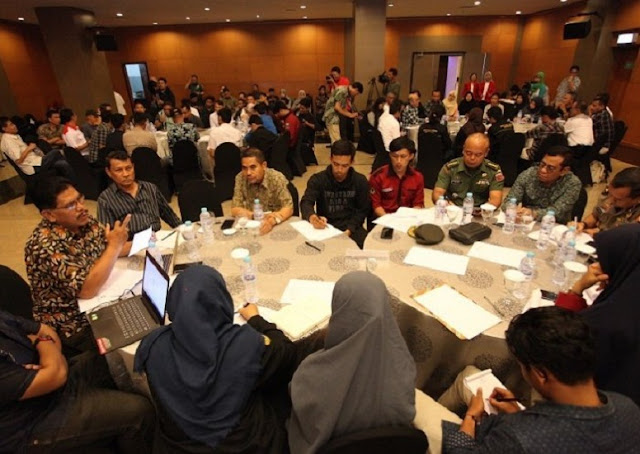 JBN.CO.ID ■ The Faculty of Social and Political Sciences (FISIP) of Hasanuddin University initiated a Focus Group Discussion (FGD). That is to dissect the problem of democracy and nationality.

The FGD with the theme From East (Sulsel) for Peace in Indonesia lasted for two hours. The discussion is divided into five groups. They discuss different sub points.

Various problems that have arisen in Indonesia are judged because of the decline in trust in leaders. In addition, the main problem is the weak leadership character and the exemplary crisis. That makes political stability turbulent.

"The community values ​​our leaders, unable to protect. Commitment to the ideology of the nation is also in doubt, "said the Lecturer of the Faculty of Social and Political Sciences, Adi Suryadi Culla during the FGD.

The root of the problem, continued Culla, is complex. Mainly weak leader recruitment patterns. The regeneration process in political parties and regeneration are not well formatted. In addition, the mentality of the people during the election was also increasingly alarming.

"That's the problem that we experience. Supervision related to the role of the KPK and several institutions also becomes a source must play a maximum role, "he said.

An instrument is needed to make the ideal leader criteria. "The solution is to fix the process of political recruitment, fixing voter education. This has not been completed until now, "he said.

The Chairperson of the South Sulawesi DPRD, Andi Ina Kartika Sari, who was also present at the FGD, said that to correct the political moral issues, a revision of the Political Party Law must be revised.

"Here the point is, cadre, recruitment is inside (there). So there needs to be a revision if we want to improve our political system, "he said.

Deputy Dean III of the Social Sciences Faculty of Hasanuddin University, Hasrullah, who is the Chair of the FGD Committee Hasrullah, explained that the FGD was expected to be able to build peace from the east.

What sticks out in the forum, purely out of the belly of the campus. This forum, Unhas tried to show what things could disturb stability.

The ten recommendations produced. First, supporting the delivery of the aspirations of the community including the student movement, as part of the nation's elements within the framework and corridors of democracy.

Second, encourage each element of the nation to be able to be involved in a participatory manner in various processes of nation building.

Third, encourage the formation of a political system that is more democratic, participatory, and responsible for the interests of the nation.

Fourth, placing morality and political ethics as the main pillars in political dynamics in various fields of interaction.

Fifth, the development of the nation's political economy system that is more friendly to the interests of the people.

Sixth, placing political stability and security as shared aspirations established within the framework of democratic values.

Seventh, making noble local values ​​of the diversity of society an important principle in the dynamics of national and state life.