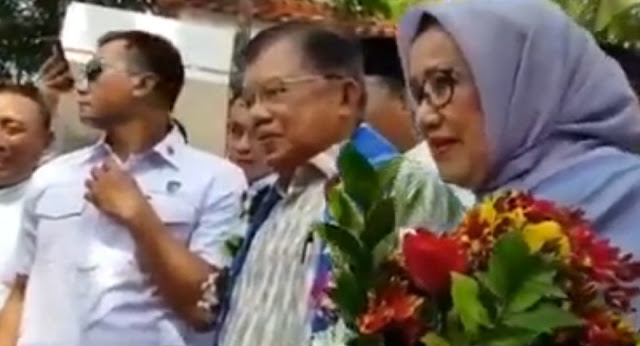 JBN.CO.ID ■ This morning, former Vice President Jusuf Kalla (JK) together with Mufidah Kalla's mother returned to Makassar. The agenda of JK returning to Makassar is very special. The reason is that thousands of South Sulawesi residents welcomed JK.

Not only the Governor of South Sulawesi, HM Nurdin Abdullah, who picked up directly at Sultan Hasanuddin Airport, Maros, on Saturday (26/10), but in fact thousands of South Sulawesi residents also welcomed JK at his residence.

As is known, JK has completed his term of office on October 20 as Vice President, but only this time he
opportunity to return home.

Monitoring of the media crew, JK and his entourage arrived at 08.19 Central Indonesia Time on a Garuda Indonesia flight GA-604.

Shortly at the airport, Prof. Nurdin along with hundreds of residents drove JK to his residence on Jalan Haji Bau, Makassar where thousands of people were also ready to welcome.

Unexpectedly by JK, it turned out that on Jalan Haji Bau-Arief Rate, JK and his entourage were welcomed by thousands of residents and then walked to a private residence greeted by Shalawat Badar.

While the children of Atirah Makassar Elementary School who were present this morning also recited the Koran memorization.

The Governor of South Sulawesi, HM Nurdin Abdullah called this former Vice President of Indonesia a Hero of Peace.

"Mr. JK is a world peace figure and is the pride of the people of South Sulawesi." JK, who succeeded in helping two presidents, and a figure who knows himself as a good vice president, "he added.