Happening in Indonesia, the wife criticized the Minister, the husband was immediately fired

Happening in Indonesia, the wife criticized the Minister, the husband was immediately fired 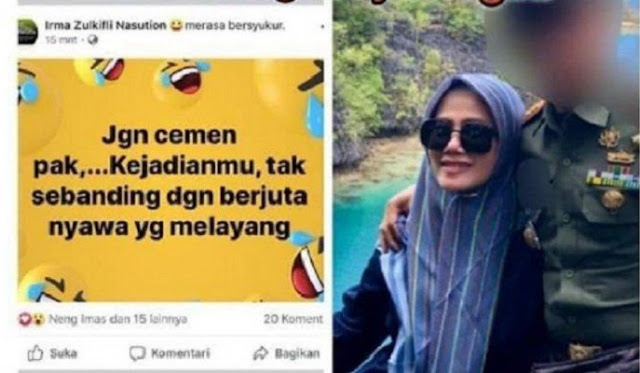 Because the two wives of members of the TNI are suspected of making interesting and surprising information on social media.

"To these two people who posted the news, we allegedly violated Law Number 19 of 2016 on Information and Electronic Transactions (ITE). Then we will push the process to the general court, because indeed the status of these two individuals is included in the realm of the judicial process, "Army Chief of Staff (KSAD) General Andika Perkasa said at the Gatot Soebroto Army Hospital, Central Jakarta, Friday (11/10).

Andika explained that the two people in question were the wife of the Kendari Dandim, Colonel HS, namely IPDN, and the wife of a soldier who served in the Bandung Equestrian Cavalry Detachment, Sergeant Two Z, namely LZ. Both made slanted posts about the Wiranto stabbing incident.

As a result of his wife's position, her husband's position was threatened, even Colonel HS and Second Sergeant Z had to be removed from their posts. In addition, the two TNI soldiers also received detention sanctions.

"As a consequence, I have signed a letter of release for Colonel HS from the office and will be added to military discipline in the form of a mild detention for 14 days. Likewise with the second sergeant Z, a warrant was issued to relinquish his position and serve a disciplinary sentence," he concluded.

The change also marked the change in the status of the Kendari Kodim in accordance with TNI Commander Regulation No. 6 of 2019 concerning the Improvement of Kendari Kodim Status from Type B to Type A and led by a colonel.

Previously, the uproar on social media was related to incidents experienced by the Coordinating Minister for Politics and Security.

In Facebook status that was allegedly written by the wife of a TNI member. The first post was written by Irma Zulkifli Nasution's account, "Don't be whiny sir, ... Your incident is not worth the millions of lives lost."

Meanwhile, the second posting, "Given the case of Pak Setnov ... continues, apparently, using a substitute actor,".

There are no words that mention the name of Wiranto in these two posts.