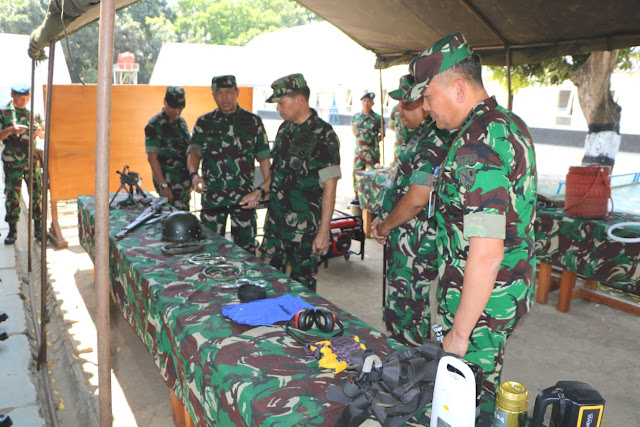 JBN.CO.ID ■ Commander of the Air Force (Dankodiklatau) Military Air Marshal Young Tatang Harlyansyah, and his entourage, held a working visit at the Adi Soemarmo Air Base on Monday (10/21).

This work visit was carried out before the Closing of Education, Inauguration and Oath Taking of the First Students of the Private Army Careers (Semata PK) Army Air Force 77th Force during a military ceremony at the Dirgantara Lanud Adi Soemarmo Field.

The working visit to the Adi Soemarmo Lanud was the first visit since his new position as Dankodiklatau.

The work visit is expected to get valuable guidance in the efforts to improve the quality, capability and work mechanism at the Adi Soemarmo Air Base, especially in terms of improving the quality of students' results in accordance with the established educational goals and objectives.

So that in the future be able to carry out tasks better in accordance with work programs and expectations of the leadership of the Air Force, said Danlanud Smo.

Meanwhile, Dankodiklata or Marshal Young TNI Tatang Harlyansyah, said the purpose of the work visit at the Adi Soemarmo Air Base was the first for hospitality between Kodiklatau and Air Smud Air Officers and to know firsthand the problems in the Adi Soemarmo Air Force.

At the same time the Chairman of PIA Ardhya Garini Combined II Kodiklatau Ny. Tatang Harlyansyah and his entourage also made work visits to several Angkasa Schools under Yasarini such as PAUD Angkasa, TK Angkasa, SD Angkasa and SMP Angkasa.