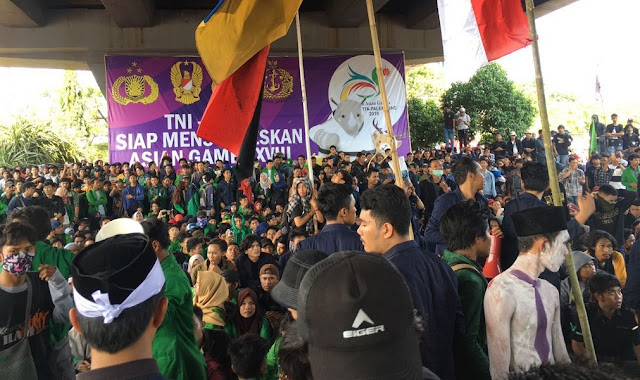 JBN.CO.ID ■ The statement of the South Sulawesi Regional Police Chief calling for no demonstrations ahead of the presidential inauguration on 20 October, was unfortunate by various parties.

One of them was delivered by the Student Executive Board (BEM) of the Faculty of Social and Political Sciences (FISIP) Bosowa University (UNIBOS) Makassar.

General Chairman of the BEM FISIP UNIBOS Makassar, Rey Gunarmin, in his release tonight assessed that the statement from the police was a threat to citizens if anyone wanted to express their aspirations.

"It is very unfortunate related to the appeal issued by the South Sulawesi Regional Police that the ban on demonstrations began on October 16-20, 2019," Rey said, Tuesday, October 15.

Rey said that in Act No. 9 of 1998 concerning freedom of expression, it was not explained that in the context of the presidential inauguration it was forbidden to carry out demonstrations of any kind and issue.

According to him, it becomes funny when this appeal is based on security reasons and conducivity of the state, it seems that the security forces are afraid in welcoming the inauguration of the head of state.

"In our opinion, don't overdo it. TNI-Polri should have been able to detect / ascertain which groups will carry out movements or actions that are intended to frustrate / reject the inauguration of the president and vice president, don't even be confused with all, "he stressed. (Rls/Foto: ilustration)