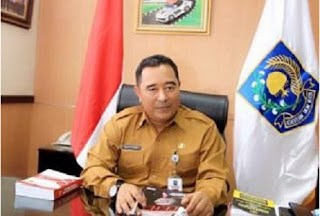 JBN.CO.ID ■ Head of Information Center who is also Acting. The Ministry of Home Affairs Director General of Politics and Public Administration, Bahtiar Baharuddin, said many factors were responsible for the continuing increase in the number of regional heads affected by legal issues, especially corruption.

This can be seen from the data held by the Ministry of Home Affairs which shows that in the period 2014 to 2018, there were 107 cases of legal problems involving regional heads / deputy regional heads with a total of 93 cases resulting from corruption and bribery cases.

However, it continues to remind regional heads to stay away from areas prone to corruption.

"Many factors cause it, even though we continue to remind on various occasions that regional heads avoid corruption-prone areas," Bahtiar explained, yesterday.

Especially before the upcoming 2020 elections simultaneously. Bahtiar revealed, one of the factors was the relatively expensive selection process, and the recruitment system that prioritizes electability compared to integrity.

"The system of recruiting regional leaders who prioritize electability and popularity over integrity and personal capacity also contributes to the large presence of regional heads who are involved in legal issues," he said.

Political costs for the implementation of the elections are indeed a joint homework. Political education of regional head candidates and especially the community as voters may be a short-term solution.

The long term is to review the regulations on the process of the implementation of the elections, so that it is possible to implement a low-cost election process.

Not only that, the amount of power or authority of the regional head including the management of the regional budget, the appointment of officials (as PPK), and the issuance of permit documents also has the potential to lead to corruption and bribery.

"Weak accountability in oversight of the Regional Head and discretion on a problem that must be done by the regional head when the rule of law applies can result in legal problems in the future," he explained.

The lifestyle of young and young consumptive leaders is one of the contributing factors.

"The lifestyle of relatively young leaders who are sometimes stylish and consumptive can also be a trigger for the emergence of corrupt behavior. The issue of the integrity of young leaders is something that needs attention, "Bahtiar said.

Efforts that continue to be made by the government and the KPK as well as other law enforcers in overcoming this problem include providing anti-corruption education, emphasizing the importance of Prevention Measures that are often carried out in the Regional Head Orientation Training.

"Our campaign for state administrators to stay away from areas prone to corruption continues to be increased, and of course we also need the support of all stakeholders," he said.