A New Mode of Human Trafficking in Cianjur Revealed

A New Mode of Human Trafficking in Cianjur Revealed 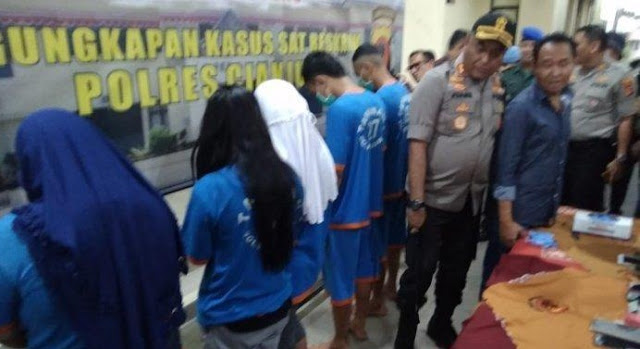 JBN.CO.ID ■ Cianjur Police Criminal Investigation Unit succeeded in dismantling the trafficking syndicate in the Bunga City villa area. Five of the perpetrators were secured after being caught carrying out the practice of trafficking in persons with special sexual transaction modes to foreign tourists.

Cianjur Police Chief Adjunct Senior Commissioner Andi Prayitno said, there were eight victims who were secured. Three men are employed as ladyboys and five women are offered as commercial sex workers (CSWs) by the suspects.

"These eight people were used as prostitutes to serve foreign residents in Kota Bunga, Sukanagalih. They are looking for profits by buying and selling children to foreign tourists, "said Andi, at the Cianjur Mapolres, Tuesday (10/08/2019).

He said, the suspects had the initials BN (21), JK (26), JJ (25), MM (28), JE (38), three of whom were women. They have the mode of buying and selling sexual services by recruiting first. After getting a prospective prostitute, they offer it to tourists who are dominated by Middle Eastern tourists.

According to Andi, the perpetrators used motorbikes and cars to get around in the Kota Bunga villa area. When traveling, the offender offers the victim to provide sexual services.

"Based on the investigation, the prices offered are different. Because there are those who serve hourly or per day, if the hourly amount is around IDR 300,000-500,000, "he said.

Based on this finding, the perpetrators are now threatened by Article 2 paragraph 1 of Law Number 21/2007 concerning Eradication of Trafficking in Persons (TPPO) with a maximum sentence of 15 years in prison and a maximum fine of Rp600 million.

"Our actions are at the same time answering leaflets circulating on social media. Many want that Kota Bunga can return to being a tourist location, not a commercial sex area, "said Andi.

Until now, the Cianjur Police Satreskrim through the TPPO timsus continues to record data related to similar cases that occurred in the Cianjur area.