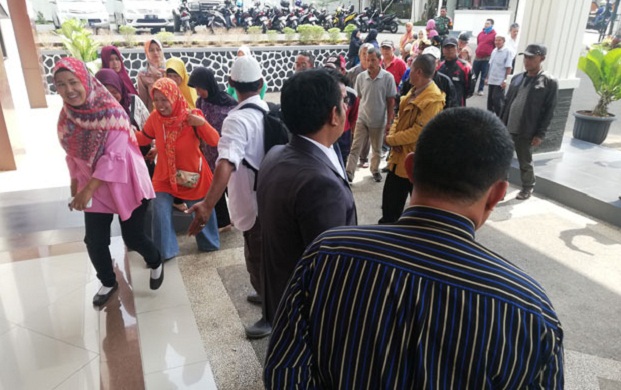 They sued President Joko widodo for Rp1 (one rupiah). The lawsuit relates to the blocking of Jalan Prana by the School for the Establishment of Officers of the Police Education Institution (Strukpa Lemdikpol) which was filed to the National Police Headquarters, the Minister of Finance, the National Land Agency, the Governor of West Java, and the Mayor of Sukabumi.

"The lawsuit was made by residents because the road that had been used as a portal for access to residents was installed by a portal (barrier) so that citizens' activities cannot be passed through. We are not only suing the president for one rupiah. But the police chief, Minister of Finance, Governor, BPN to the mayor," said one resident, Benny Husen.

As quoted from the "Harian Pikiran Rakyat", Ahmad Rayadie reported, Citizens' Legal Counsel, Andri Yules said, the lawsuit of citizens in two villages had been registered with the District Court of Sukabumi. The lawsuit has even been scheduled for trial on 19 November 2019.

"We have registered online. Right now we are submitting hardcopy files. Our lawsuit is representing community groups," he said.

Andri Yules said, there were 15 demands of citizens filed to the PN. in addition to the demands of Jalan Prana to be resumed by residents so that it is returned as public facilities. Also ordered BPN to issue Jalan Prana from the police certificate.

"As long as the lawsuit goes, the portal and attributes are opened and given wide access to the public," he said.

Actually, persuasion efforts have been made by residents, said Andri Yules, including writing to the Stukpa Lemdikpol to be able to use the road. Moreover, the road covers 10 RTs, 6 RWs, and Cisarua and Cikole Sub-Districts.

"The community is suing. Although that empowered us 120 people on behalf of the whole community," he said.