Shoe Thief Arrested by the Police

Shoe Thief Arrested by the Police 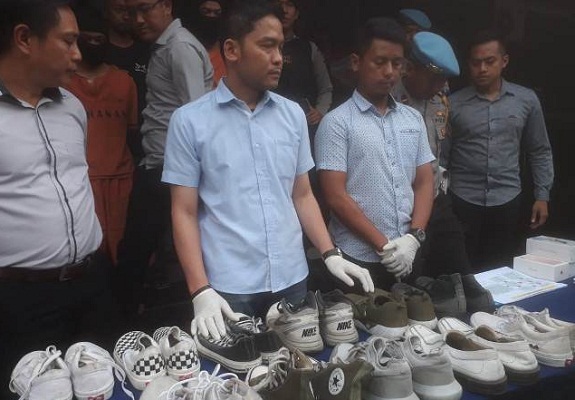 In doing the action, they are eyeing the boarding house. From the hands of the suspect secured 12 pairs of famous brand shoes which are planned to be sold to the Tegallega area, the city of Bandung.

After receiving a report from the victim, the investigator conducted surveillance and development, eventually leading to two perpetrators, so that the arrest was made a week after the incident.

"When arrested at his home, the two perpetrators did not put up a fight," he said.

In addition to 12 pairs of shoes, officers also secured motorcycle units used by the two perpetrators when they arrived at the location. Regarding the location of the theft committed by the perpetrators, Yohannes admitted that his party was still developing the case. But it is indicated not only one scene.

"He stole and then wanted to sell it, but it hasn't been done yet. The perpetrators who are indicated often act at night," he said.

Yohannes said the stolen actors' shoes consisted of various brands at unexpected prices. According to him, if collected, then relatively many are bagged by the perpetrators.

"The perpetrators were secured along with the evidence. The stolen shoes were covered by the house," he said.

According to him, the perpetrators were subject to article 363 of the Criminal Code with a sentence of 9 years in prison.