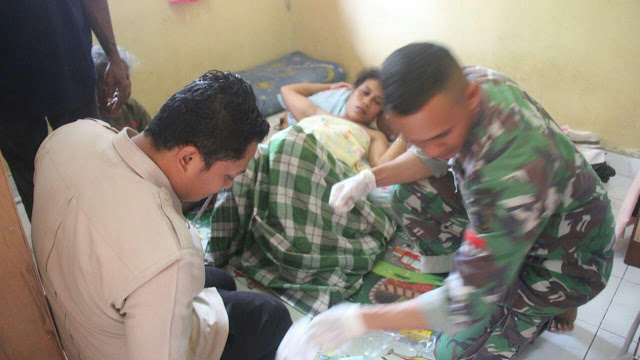 JBN.CO.ID ■ A mother on the border is bleeding at the age of 7 months. Mr Demet Awom (Mrs. Mei Patipeluhu's husband) finally asked for assistance from the Infantry Battalion Task Force (Satgas Pamtas) PR 328 Kostrad to help with the birth of his first child, in Skouw, Jayapura (07/30).

This was conveyed by Dansatgas Pamtas PR 328 Kostrad, Major Inf Erwin Iswari, and he mentioned that the incident occurred in the morning, around 07.30 WIT.

"Mrs. Mei felt a contraction in her stomach and asked for help from the Kostrad PR Infantry Battalion Task Force," he explained.

Quickly the Pos Kotis health team Pratu Feriyanto immediately went to Mr. Demet Awom's house to help with the birth of Mrs. Mei, when he arrived at his house, seeing the position of the baby's head had come out.

For 35 minutes, Pratu Feriyanto carried out a labor process to save the lives of her baby and mother.

"Alhamdulillah, after being handled by the Yonif PR 328 Kostrad health team, the baby was born safely and healthy even though it was not in accordance with the age of 7 months in the womb," he said.

"I am grateful for the assistance of the Task Force, my child named Dirgahayu Awom, because with the help of the Task Force my child was able to be born safely and hopefully later it will become a TNI like the father of the TNI," he concluded.