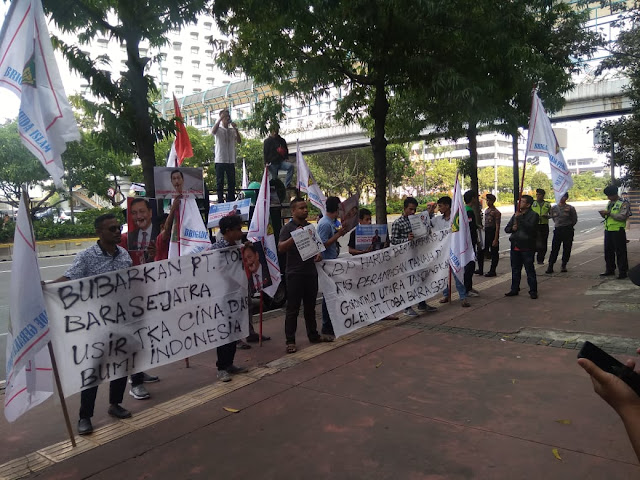 JBN.CO.ID ■ The riots occurred during the North Gorontalo People's Defense Action together with the Islamic Youth Movement Brigade (GPI) mass organization in front of the Office of the Coordinating Minister for Maritime Affairs.

This riot occurred when the police asked the mass of action not to block the road during the action.

The GPI mass action was carried out to ask Luhut Binsar Pandjaitan (LBP) to take responsibility for the North Gorontalo community's land used for the construction of the Tanjung Karang PLTU, North Gorontalo, which until now has not been paid by PT Toba Bara Sejahtera.

The Action Participants who mentioned from the People of North Gorontalo felt that LBP who owned shares in the company was morally responsible as a state official.

The mass of action carried out a blockade in front of the Maritime Office. As a result of the blockade, Jalan MH Thamrin in Central Jakarta was jammed for 15 minutes.

In addition to causing traffic jams, this road blockade forced the entourage of state officials' cars to turn around. It is suspected that the state official was the Vice President, because the group was escorted by Paspampres.

M frans as the field coordinator tried to calm the mass of action involved in tensions with the police.

He also requested that the police not take action that smelled of provocation. As the person responsible for the action, Frans stressed that the mass action was ready for jihad, to defend the interests of the people of North Gorontalo.

"Remember, men in brown uniforms, we are not afraid of anyone. This is our fourth action. We are ready to bathe in blood in this place if there is no solution to this problem. Because our presence here defends the defeated Gorontalo people," said the Action Coordinator Gorut People's Defense, Friday (2/8/2019).

This riot ended after the action mass finally fulfilled the police's call to return to speak in protocol. Representative of the heirs whose land has not been paid, Nurhayati Lasimpala (46) is concerned about the incident.

"We are small people in North Gorontalo, don't look at the police like that (debate). Just look at our Hansip. I'm afraid. Look at people wearing brown pants with lots of bags, we think the police," Nurhayati said, after the action.

He admitted that he dared to tell him because at this time the fate of his family in North Gorontalo was unclear.

He also felt confused about what to say and what to do because he traveled far from North Gorontalo to Jakarta.

He asked LBP to listen to the problems of small people like himself who felt devastated.

"Our question, sir. Why was our land executed? Meanwhile, our land, sir. To whom? Who is the buyer? Because until this year we have paid taxes. We also have proof of our land certificates. We have never felt that we sold our land. , "she said. 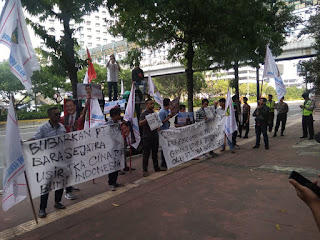