Kostrad Task Force Upholds Tradition in the Land of Papua

Kostrad Task Force Upholds Tradition in the Land of Papua 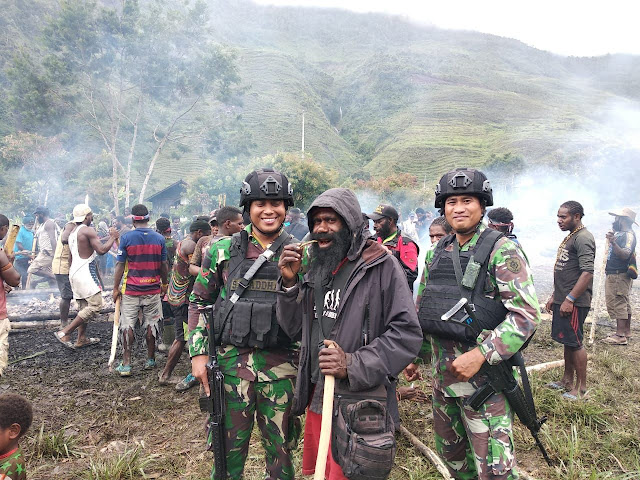 JBN.CO.ID ■ Indonesia is a country that has a wealth of culture, such as local languages, traditional clothing, food, and others.

The Province of Papua, for example, has long-standing customs. One is a stone burning ceremony which is a traditional ceremony, and it is an important event carried out by the people of Papua.

According to the RI-PNG Task Force Commander Yonif R 514 Kostrad Kostrad Major Inf Danang Biantoro a few days ago, precisely on August 1, 2019 there was an accident of a village transportation truck, in Kampung Mewulok, Muara District.

"The incident caused a truck passenger to die at the scene. In accordance with the customary law of the people of Papua, the truck driver must pay a fine or hold a stone burning ceremony, "added Dansatgas.

Major Inf Danang continued, a few days after receiving the accident information, First Lieutenant Arh Sandi Wastu as Mental Development Officer (Pabintal) along with 5 Task Force personnel, took the initiative to go to the Muara District Head's house to become a mediator (mediator) by calling representatives of the victims' families from Kampung Mewulok so that the problem resolved immediately.

"Muara and Mewulok villages are areas within our assignment area, we always guard all residents in this area, so that they can live in harmony with one another," he concluded

Present at the stone-burning ceremony Mr. Yamoben Wonda as Head of the Muara District, who expressed satisfaction and satisfaction with the presence of representatives of the Task Force members to help solve problems in the village.