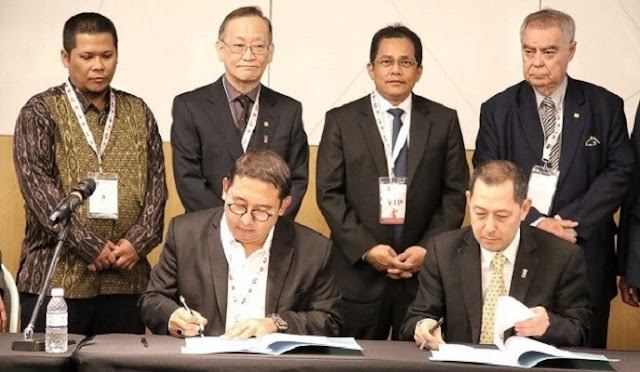 JBN.CO.ID ■ Indonesia will officially host the world philately competition or the 2020 World Stamps Championship and Exhibition.

"This will be the first Philatelic Exhibition in Indonesia held at the Indonesian Parliament Building. Not only that, this event will also coincide with the momentum of the 75th Indonesian Independence Day, namely on 6-11 August 2020, "said Fadli Zon in his written statement, Sunday morning, August 4, 2019.

Fadli said, the moment of signing the memorandum of understanding was witnessed by FIP President Bernard Beston, DPR RI Secretary General Indra Iskandar, and philately associations president from a number of countries, such as Australia, Japan, South Korea, Qatar, and Peru.

"The 2020 philatelic exhibition and competition will be the largest exhibition in Indonesia. Because, there are 3000 frames will be competed from more than 60 countries. And those are the best collection of philatelists in the world, "said Fadli.

The Deputy Speaker of the DPR said that the election of Indonesia to host the 2020 World Stamp Championship was a matter of mutual pride. Because, this big event will be supported by a number of parties such as the Ministry of Communication and Information, PT Pos Indonesia, the Indonesian Parliament, and of course the DKI Jakarta Regional Government, as the host city.

PFI, said Fadli, seeing that this international exhibition will also have a positive impact on the literacy of public literature. Because at this time there are still few who understand, that philately is not just an ordinary communication tool. In fact, philately has a very close relationship with the struggle for independence. "

Fadli explained, in the independence period, stamps and other philatelic items were used to promote Indonesia's independence to the world.

At that time, Indonesian painters took part in the struggle to propagate independence through posters, murals, graffiti and stamp paintings to inflame the spirit of anti-colonialism.

"So, stamps in Indonesia are historical artifacts of the struggle for independence. Not just a communication tool. Stamps are a witness to the history of the tenacity of the Indonesian people in seizing independence, "said Fadli.