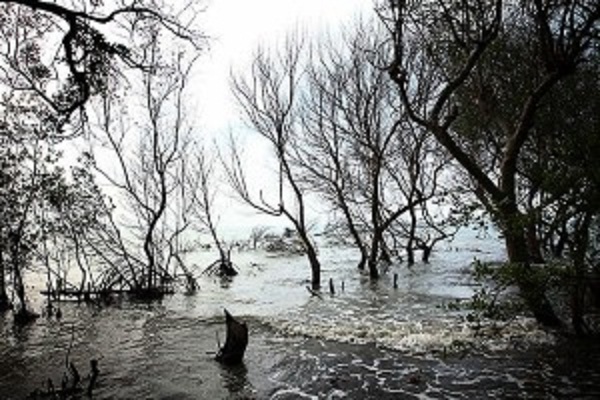 JBN.CO.ID ■ 300 hectares of mangrove damage in the Harapan Jaya Beach area, Muara Gembong, Bekasi Regency, West Java, is considered to be a negligence by the Government that lacks attention to Environmental Protection and Management.

Thus, the Chairperson of the Supervisory Board of the Independent Voice of the People's Representative Council (SIR) R. Meggi Brotodiharjo, today, Thursday (1/8/2019) confirmed this.

The Central Government in Jakarta, said Meggi, is the party that accompanies mangrove management based on the rules and guidelines that have been formulated.

Meggi added, the regulation is in line with the regulation of mangrove ecosystem management that the Government has completed from the derivative of Presidential Regulation No.73 of 2012 concerning the National Strategy for Mangrove Ecosystem Management at the International Mangrove Conference held on April 18-21, 2012 in Bali.

"Those who are negligent in managing the mangrove area can be subject to sanctions. In this case, Law Number 32 of 2009 concerning Protection and Management of the Environment and Law Number 5 of 1990 concerning the conservation of natural resources and ecosystems. Therefore, the Regional Government of Bekasi Regency must not be negligent, "he said, firmly.

The Government's target related to the mangrove ecosystem in 2045 outside of 3.49 million hectares is far from expectations. LHK data in 2015 damaged mangroves covering 1.82 million hectares while those in good condition only reached 1.67 hectares. So, the total area of ​​Indonesia's mangroves in the last 20 years has been significantly reduced due to conversion.