Ijtimak Ulama has decided to reject the elected government

Ijtimak Ulama has decided to reject the elected government 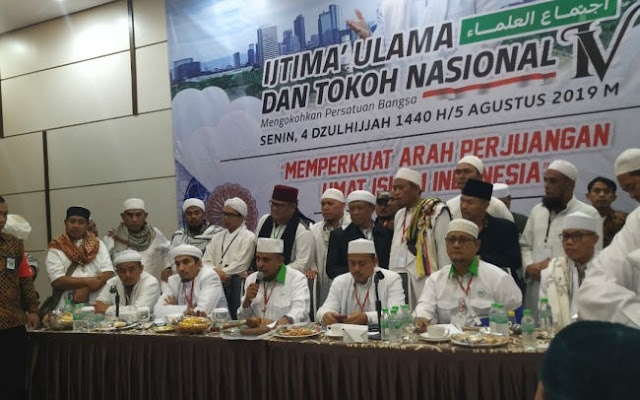 JBN.CO.ID ■ The results of Ijtimak Ulama IV held at Hote Lor In, Sentul, Bogor on Monday (5/8) have decided to reject the elected government. Because according to the discussion in Ijtimak, Jokowi - Ma'ruf Amin was chosen based on structured, systematic, massive, and brutal fraud.

"With the decision of Ijtimak Ulama IV, the ulama rejected the power that was established (based on) cheating and the ulama distanced themselves from that power," said the Ulama Fatwa Ulama's National Guard Movement (GNPF) leader, Yusuf Martak when reading the results of the ulama's Ijtimak decision.

Yusuf continued, Ijtimak also rejected all legal decisions that were not in accordance with the principle of justice.

On the next point Ijtimak Ulama also made a decision, forming an investigation and advocacy team to thoroughly investigate the deaths of more than 500 KPPS Officers and more than 11 thousand KPPS Officers who fell ill.

In addition, the team will investigate hundreds of injured demonstrators and 10 fatalities in the May 21-22 riots in front of the Bawaslu Building.

Ijtimak Ulama IV also decided to realize sharia Indonesia and make the holy book be above the constitution in the country.

"Realizing Sharia Indonesia based on Pancasila as stipulated in the Preamble and the 1945 Constitution with the principles of the holy verses above the constitutional paragraph. [This] must be carried out in religious, national and state life," Yusuf said firmly.

In addition, the Ijtimak Ulama will be institutionalized from the central level to the regions between Islamic mass organizations and Islamic political parties. From an economic aspect, Ijtimak Ulama IV asked Muslims to convert deposits in banks in the form of precious metals.