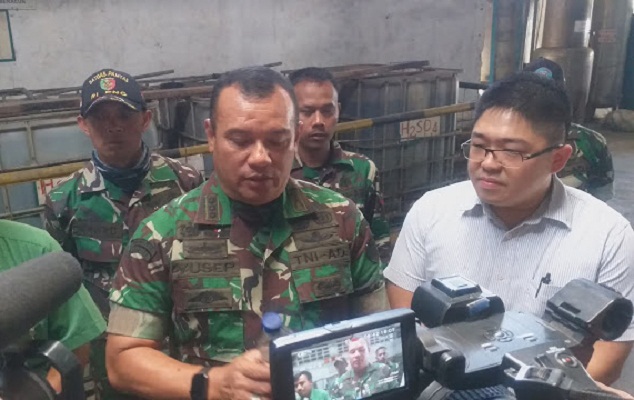 JBN.CO.ID ■ Inf. Col. Yusep Sudrajat as Dansektor 21 of the Citarum Task Force checked the Waste Water Treatment Plant (IPAL) to one of the factories located in the Cimahi City area.

This action was carried out to determine the extent to which the owners of the company, carried out a commitment that had been made with the "Sector Citarum Task Force 21" some time ago.

The company which is the purpose of checking (inspection) is PT. Dewa Sutratex, located on Jalan Cibaligo No. 76 KM. 2.8, City of Cimahi.

When asked for an explanation, Inf. Col. Yusep Sudrajat as Dansektor 21 explained, "Today for the third time, Sector 21 Task Force checks the WWTP to one of the factories in the Cimahi area. This is to check back, the commitments we have made Previously, PT Dewa Sutratex also made a commitment with us about 7 months ago and now we check again and the results can be seen together, "said Dansektor.

After we checked just now, said Dansektor, the results were clear and there were fish that had been in the shelter for a long time. So that what has been committed with PT. Dewa Sutratex , especially sector 21 which is still maintained.

"Now we can see, what used to be a Installation did not exist, now it has been made and there are more additions to pursue the parameters required by us, sector 21 Task Force," he said.

According to him, it is not easy to implement this, where the budget is also not a little out. But that is in accordance with the production taken by this company.

Dansektor 21 remains committed that Presidential Regulation No. 15 of 2018, which was published in round March 2018, can only run if it starts from the Dansector as Task Force or Task Force Commander, until the steering team keeps guarding it will function properly.

"We will keep guarding it and of course there is no other choice, moreover the President who issues and the President is the Commander-in-Chief of the TNI. I, as a TNI, must carry out the order," explained Colonel Yusep.

Our conclusion is, said Dansektor, the 3 factories that have been checked today, I think it's enough and I don't need to evaluate it anymore.

"The factories have just treated the waste well. Unless there are those that are lacking, both dead fish and so on, or it is no longer safe and comfortable to throw into the environment in the Citarum watershed, we just need to evaluate it," concluded Dansektor

Meanwhile, when confirmed the company did not want to give a related response made by the fragrant Citarum Task Force led by Inf. Col. Yusep Sudrajat as Dansektor 21.

However, according to one employee of the WWTP who did not want to be named, the company has always been trying to make improvements to the WWTP to make processing better and safer.