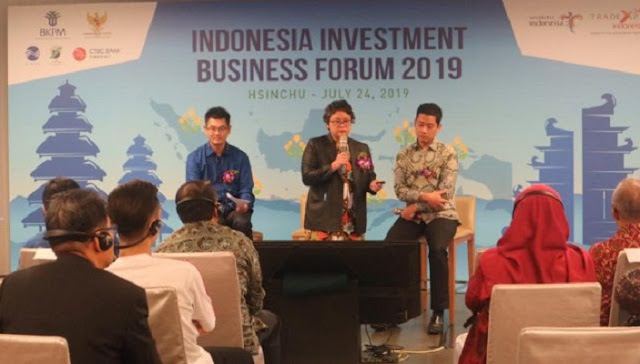 JBN.CO.ID ■ Apart from Batam, it turns out that Selayar Island tourism is starting to be in demand by foreign investors, especially from Taiwan. This was revealed in the dialogue of the Indonesian Business Investment Forum (IIBF) which took place in Taipei and Hsinchu, Taiwan on July 22-25 2019.

"Indeed, there are some friends who are interested in investing in the tourism sector in South Sulawesi, including the Selayar archipelago. But it is still in the planning stage, because of course more mature studies and surveys are needed," said Executive Director of the Market Development Department, TAITRA Trade Development Council (Taiwan External), James KJ Chen in business dialogue with the media.

James acknowledged that Indonesia is a Promising Land for long-term investment and it is time to invest in Indonesia.

According to James K.J. Chen in the Indonesian Investment Business Forum (IIBF) as part of the ASEAN Taiwan India Strategic Investment Partnership Forum held in Taipei and Hsinchu, Taiwan, there are many things that cooperation programs can do to share.

Previously, the BP Batam delegation had the opportunity to visit the Pegatron company which had opened one of its product lines in Batam which was inaugurated on July 9, 2019.

This group was received by the Chief Financial Officer and staff of Charles Lin. Charles Lin stated that the reason for choosing Indonesia to develop the Pegatron business was because Indonesia had good resources and also the right time for Pegatron to invest.

"If the business climate in Batam is quite conducive, and logistics costs are quite competitive, then there is a possibility that facilities in Batam can be as big as Pegatron's facilities in Shanghai or Suzhou, where production capacity can create jobs for up to 50,000 workers," he explained.

He stated that the results of the forum received a positive response from one of the associations in Taiwan in the field of Electricity & Electronics, and promised to bring a group of Taiwanese businessmen to visit Batam in early September this year.

"The results of the meeting with the largest company in Taiwan that manufactures smart devices, are also interested in investing in Batam and will make a visit to Batam to see first hand the investment climate in Batam," he added.