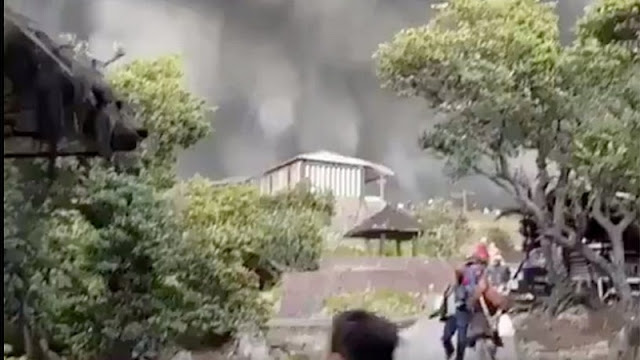 JBN.CO.ID ■ The Center for Volcanology and Geological Disaster Mitigation (PVMBG) states that based on the analysis, Tangkuban Perahu Mountain still has the potential to erupt with ongoing tremors recorded.

Devy K Syahbana, Head of the Eastern Region Volcano Mitigation Sub-Sector, explained that the eruption on Friday (7/26/2019) was caused by steam magma which interacted with the hydrothermal system of Tangkuban Perahu Mountain. Then, there is a change below the surface so that an eruption occurs.

"This condition can occur in several mountains not only in Tangkuban Perahu, but at Papandayan, Dieng is the same, and this usually does not start with a clear sign, he can happen at any time," Devy said at the Geology Monitoring Agency's PVMBG Room, Jalan Diponegoro, Bandung City, Saturday (07/27/2019).

According to him, based on the eruption that occurred, the threat was only in the area around the crater, to be outside the crater would not be too dangerous.

"If the crater outside is not too dangerous, at least prepare a mask," he said.

Meanwhile, Head of the Administration of the Volcanology and Geological Disaster Mitigation Center (PVMBG) of the Ministry of Energy and Mineral Resources (ESDM), Gede Suantika said the Tangkuban Parahu eruption would not have an impact on the Lembang Fault movement.

According to him, the Lembang Fault movement may occur when the eruption that occurs is very large to release magma.

"Eruption is now very small if you want to be associated with the Lembang Fault. The Lembang Fault movement can occur if the magmatic eruption," said Gede.

For this Kejadin, PVMBG has provided recommendations to managers of tourist attractions not to give permission to the community to be around the area, especially the queen crater and upas crater with a radius of 500 meters.

Traders, tourists, and climbers are not allowed to stay in the active crater area inside the Tangkuban Parahu Mountain complex.

"It is requested that the surrounding community be aware of the increasing concentration of volcanic gas and are advised not to linger on the edge of the crater," said Gede.