BW worries about the safety of expert witnesses

Home   INTERNATIONAL BW worries about the safety of expert witnesses

BW worries about the safety of expert witnesses 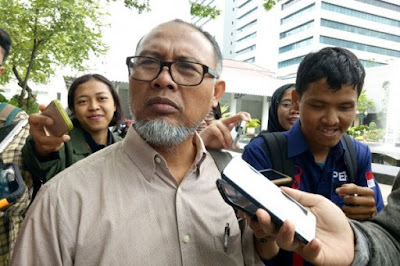 JBN ■ The Chairperson of Prabowo-Sandiaga's Legal Counsel Team, Bambang Widjojanto (BW) asked their witnesses to be protected by security, including from threats ahead of the presentation of witness testimony at the 2019 Presidential Election Dispute Session at the Constitutional Court.

According to BW, his side is currently fighting against the power of presidential candidate Joko Widodo as president who can regulate power. That's why BW asked all of his witnesses to be kept safe.

"In the face of the system, where the regime is the ruling power. So security and witnesses are an important part. Then later when we submitted a witness, would the Court want to guarantee the safety of the witnesses ?, "BW said at the Jakarta Court building on Friday (6/14/2019).

Unfortunately, BW did not say how many witnesses he would take. "God willing, there are many (witnesses). If it is permissible," said BW.

Previously, BW had said that his party was having trouble bringing in so many witnesses from various regions in Indonesia. Even though the witnesses were so important, because they were direct witnesses of fraud allegedly carried out by the candidate pair 01 as sued by Prabowo-Sandiaga's BPN legal team.

"Look, sir, suppose we can bring the witnesses to Jakarta, but how are they safe while in Jakarta. Okay, the witnesses can give their testimony at the Court's trial. Then how about their safety afterwards, especially their safety when they are in their respective homelands. This is rather a problem. Remember that what we are suing is not just a pair of presidential and vice-presidential candidates, but a president who is in power, "concluded BW.