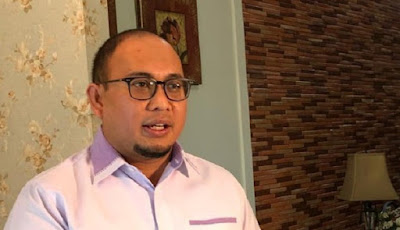 As previously released, the two sons of the 6th President Susilo Bambang Yudhoyono (SBY) were intensively in touch with a number of party officials who were the opponents of the Demokrat political attitude in the 2019 Presidential Election.

AHY and Ibas appeared to attend President Joko Widodo's open house on the first day of Eid al-Fitr on Wednesday (5/6). Not long after that, AHY and Ibas also visited the residence of the PDIP Chair who was also the 5th President, Megawati Soekarnoputri.

AHY and Ibas's attitude was later translated as a Demokrat maneuver who wanted to get close to the power circle. Not a few also said that the Demokrat party was trying to reach a ministerial position for AHY.

Latest, Young Demokrat politician Andi Arief voiced his voice. Through Twitter, he raised a lot about the Paslon 02 Prabowo-Sandiaga maneuver, which often ignored the input from the Demokrat Party while fighting in the presidential election campaign.

Andi also said that Demokrat had been abandoned by Prabowo when he was about to declare with Sandiaga Uno a few months ago.

Andi Arief's words were then responded to by Andre Rosiade. The man who is also the Prabowo-Sandiaga Spokesman reminded Andi to stop looking for attention by bringing up the kitchen of Prabowo-Sandi BPN.

Not enough to get there, Andre also invited if the Demokrat really want to dock at the Jokowi-Maruf Amin line.

"Already, Andi Arief does not have to pay attention to taking care of 02. If Demokrat want to join 01 or Agus Yudhoyono wants to become Minister, Mr. Jokowi, please. We have no business to blame or want to blame Agus Yudhoyono. Please ... don't look for attention , "Andre wrote on Twitter on Friday (7/6).

Andre's brief response received support from netizens. They also highlighted Andi Arief's attitude and the maneuvering of the Democrats who showed signs of going across to the ruling ranks.