Prabowo: UBN as Suspect, That Forms the Criminalization of Ulama

Home   BALINEWS POLITICS Prabowo: UBN as Suspect, That Forms the Criminalization of Ulama

Prabowo: UBN as Suspect, That Forms the Criminalization of Ulama 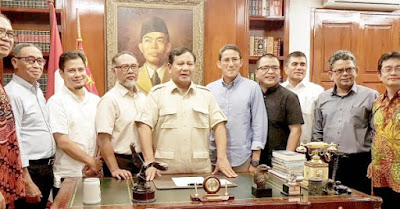 According to Prabowo, the determination of the UBN case is a form of criminalization of Ulama, especially Ulama who support partners 02, Prabowo-Sandi.

"Starting from summoning several elements of our supporting figures. The withdrawal to UBN stated by the Police in that case has passed in 2017. Then after being examined there were no criminal elements in the incident," general chairman Gerindra said at a press conference at Jalan Kertanegara, Jakarta South, on Wednesday (8/5).

Prabowo considers this step as a form of criminalization of Ulama who support him. Moreover, the determination was made after the scholars held Ijtima Ulama III in Bogor last week.

"We consider this as an attempt to criminalize ulama and efforts to silence the statement of the critical attitude of community leaders and scholars. For us the democracy and life of the constitution guarantees the right of individuals to express their opinions," he concluded.

Meanwhile, Bachtiar Nasir must be questioned today as a suspect of money laundering (TPPU) for the Justice for All (YKUS) Foundation. But because of the preoccupation with the da'wah agenda, UBN requested time until next Tuesday.