Prabowo Has A Way To Make The Economy Spin

Prabowo Has A Way To Make The Economy Spin 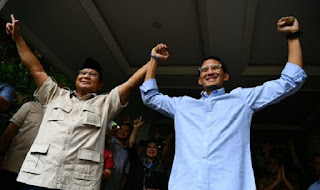 JBN.CO.ID ■ Prabowo Subianto and Sandiaga Uno are determined to realize a government that is pro business and pro on the interests of the people.

This was conveyed by Prabowo Subianto in the event of the Declaration of Support of the National Entrepreneur Alliance for Indonesia Wins at the Jakarta Theater, Jalan MH Thamrin, Jakarta, Thursday (03/21/2019).

Prabowo said that entrepreneurs have a strategic position in national development. Entrepreneurs are the spearhead of a nation's economic revival. The more entrepreneurs, the economy will move.

"Since five months ago, frankly we have struggled with frugal packages," Prabowo said, laughing at the audience.

"But we fight for the benefit of the people, for all. We are pro business, pro people. Why? The end of the struggle for economic revival is entrepreneurs. You imagine, a thousand entrepreneurs here, if you have one hundred employees, how many families have you lived? There will be millions of people living from your company, "Prabowo said.

Prabowo believes that entrepreneurs in the country have witnessed how in the past five years Indonesia's economic conditions have deteriorated. The government as a national economic navigator has failed to realize prosperity for the people.

"Although the government's claims show figures and our economic statistics are growing, data from the World Bank and other comparative data shows that our economy is in a bad condition," Prabowo said.

Therefore, continued Prabowo, after being installed as president, he was determined to provide convenience for domestic entrepreneurs. With these facilities, it is hoped that the Indonesian economy will recover soon.

"Ladies and gentlemen, so we need a lot of rich people. Even though I don't have an economic degree, I still remember the teachings of my father (Soemitro Djojohadikusumo). One of his teachings is, the aim of economic development is to create many rich people. There are lots of rich people, all employees are living, the economy is spinning," said Prabowo.