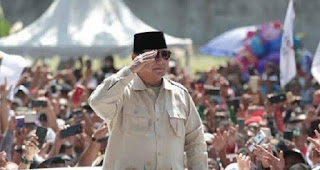 JBN.CO.ID ■ Prabowo Subianto visited Merauke and met the Papuan people, on Monday for the first time as a presidential candidate.

According to Dahnil Anzar Simanjuntak, spokesman for Prabowo Sandiaga, Chairman of the Gerindra Party will depart for Bali and West Nusa Tenggara (NTB) after carrying out a campaign in the country's easternmost province.

"Pak Prabowo visited Merauke today, and then he will fly to Bali and Lombok," he told the media crew on Monday (03/25).

Earlier on Sunday, Prabowo had also visited Manado, the capital of North Sulawesi, where he spoke to thousands of supporters.

"As usual, Mr. Prabowo will talk about economic development, infrastructure, food security and so on. Most importantly, he will listen to the aspirations of the people, "he said.

While in the campaign in Jakarta, said Andre again, Sandiaga will also meet his supporters who are classified as militants, they are mothers who care and really hope for a better change for Indonesia.

Besides that, said Andre, our campaign aims to reach out to voters from the millennial generation in Jakarta, explaining that the majority of voters who have not yet decided on the capital are from that age group.

"Sandiaga will talk about work in the campaign. We hope we win in Jakarta, "Andre said.

Regarding Prabowo's campaign in Merauke, Deputy Chairperson of the Prabowo-Sandiaga National Winning Body, Mardani Ali Sera said, the BPN TEAM would continue to try to win votes in Papua, even though the province was a mass base of supporters of presidential candidates 01.

"The target is to win in Papua," said Mardani.